Just for laughs: Wisdom from kids

Just for laughs: Wisdom from kids 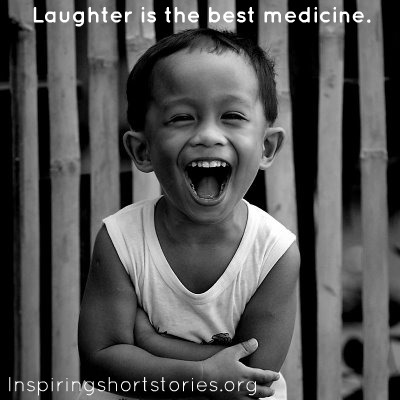 My nephews' wits and innocence always amaze me. I decided to compile some funny moments with them. As I add more in the list, I will place this entry back in featured list. This blog is inspired by Reader's Digest's 'Laughter is the best medicine' portion. Laughter is indeed the best medicine! Like I tweeted, a happy disposition is the best makeup to wear every day.

Cedie's superstition
You know how superstitious Filipinos are… One day, my 4 year-old nephew Cedie had to pee. When he started pee-ing, he said in a whisper, "tabi-tabi.. tabi-tabi..". His dad asked why he said those. His answer? So that his shorts won't get wet. LOL
Andrei's version of 'Thy will be done'
On grandparents' day, we decided to go island hopping because it was low tide at the beach we were in. It was a 20-minute boat ride and the waves were strong. Niño, one of my nephews, was trembling in fear and crying. Thank God everything was well. On the way back, we were worried of Niño still. We decided to pray as a family before the trip and let Andrei, my other nephew, lead the prayer. I was expecting a memorized prayer that he usually prays. Instead, he decided to be spontaneous. Andrei started, "Lord, please keep us safe on the boat." He was closing his eyes while praying and looks really sincere. He continued, "if you want us to die, then let us die." I could see all the adults fell down from their seats in laughter (or fear.. whichever you call it. LOL).
Benedict wises up
We were at the dining table talking with the rest of the adults in the family. Benedict, from an afternoon nap, went downstairs barefoot. His dad reprimanded him for walking without slippers. "No walking without slippers!" Benedict immediately stepped on top of the chair near him. We went back to our previous talk at the dining table. After a few minutes, we saw Benedict down on 4 limbs crawling across the living room. His dad in a stern voice asked, "What are you doing, Benedict?". He answered, "crawling because I don't have slippers. I can't walk!"
Andrei's modern family
My cousin and his wife, who separated for 7 years, were finally reconciled and renewed their vows. During their separation, my cousin had a son with another woman. In a family reunion, Andrei said hello to his one-year old cousin then turned to the wife and asked.  "Who's son is he?". "Your Uncle Bobot's", my cousin's wife answered. "So, are you his mother?". He continued, "when did you get pregnant?". Her reaction? **'earth, swallow me whole' here expression** LOL
Andrei's art exhibit
Friday is art class in 1st Grade school. The teacher instructed her students to create a greeting card for their parents using cut-out colored papers then she left the room for awhile. Andrei, being the kid that he is, asked his classmates to line up. "I'm a barber. Come! Line up! I'll cut your hair nice." When the teacher came back, 7 students already have newly unevenly cut hair. Imagine how the parents' reacted after that! Of course, he, his parents, and the teacher were called to the principal's office.
Andrei's dream when he grows up
Andrei has always been a good kid. He's been going with his grandma to the doctor's clinic for her checkup. In one visit he told his grandma, "Mama La, you know when I grow up I want to become a doctor." Mama La was so touched as she thought Andrei wanted to be a doctor to treat her. So she asked, "Why do you want to become a doctor, Andrei?". Andrei replied, "because you always give money to the doctor every time we come and visit. Look at the people here. They give money to the doctor too. The doctor is very rich!" *Toink!*
As a Sunday obligation, the whole family went to hear mass at a nearby church. During offertory, Andrei asked his grandpa, "Papa Lo, where do all the money go to after the offertory?". Papa Lo replied, "to the priest. Why Andrei?". After scanning the room and seeing a filled church, he replied, "Hmm.. I changed my mind. I don't want to become a doctor. I want to become a priest!" *toink toink!*
Benedict needs a break
Benedict is a wise-mouthed kid. Uncle LJ loves to tease him all the time. One night, Uncle LJ spent time at the kids' room teasing him. Benedict went out of the room and came back calling his uncle. "Uncle LJ, you are called by Papa Lo. Please come outside". As soon as LJ went out, Benedict went back in. LJ went to his dad and asked why he was called. His dad looked puzzled and told him he didn't call him. Because LJ already got out of the kids' room, he decided to no longer come back. I guess that's mission accomplished for Benedict!

<I do not own the pic. Pic is taken from inspiringstories.org.>